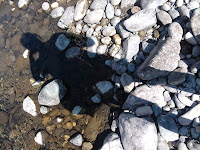 I sit in the dark, wedged in row twelve, aisle C, seat sixteen, my legs crossed tightly and I wait.  The audience is suspended in blackness; the single center stage spotlight with the number eight filter falls faintly on the middle five seats in the very front row.  I watch the people seated there

One man leans forward, tightly coiled as if he’s going to spring from his seat at any second.  The woman sitting next to him picks lint off her black scarf, occasionally patting her grey hair piled loosely in a bun at the nape of her neck.  The woman on her right is motionless save a slightly tapping forefinger in an otherwise still hand resting in her lap.  Next to her, a young man in canvas shorts, long sleeve t-shirt and silver Asics running shoes, fidgets all his extremities, crossing and uncrossing feet, legs, arms and hands.  The final man in the row wears sandals and I see his toes curling tightly and then stretching, toes fanning out with an impressive amount of space between each toe. He must do yoga.

A woman in row ten muffles a cough with two cupped hands placed tightly over her mouth.  Someone else shifts and their shoes sound as if sand is being rubbed into the floor.  It seems as if everyone is holding their collective breath, as if all fifty of us are exhaling with extreme caution. The air feels like the low pressure before a summer storm.

A lone man on stage stands in the white pool of light, one arm arched over his head, each finger dangling precisely towards the floor. The other arm is folded tightly around his torso.  The veins in his forearm pulse slightly. Otherwise, he is perfectly still.  It is impossible to detect his breathing.  He has stood this way forever.  We, the audience, continue to wait and pretend we can be as still as he can.

Three dancers enter from behind the audience, descending from each of the three isles, they storm the stage.  Their arms move wildly, popping shoulder joints to flick forearms, wrists, fingertips in crashing waves.  Feet rolling, knees angled assertively to the sides, they suck in all the air and exhale it back in silent thunderous clouds.  They form a small circle around the lone man who has not moved.  They kick, step, pop knees up in high jumps and land soundlessly.

This is what I hear when I watch them.  The lone man remains motionless.  I don’t know who I should root for.

A ballerina leaps across the stage, all legs and long arms with fingers that seem to stretch for miles, dark hair piled tightly in a neat bun on the back of her head, a red tutu unraveling behind her as she leaps, legs stretched impossibly straight, across the stage.

I notice a mime who has somehow made it to front center stage and is silently screaming.

Earlier that day my husband and I were arguing about what it means to really listen.

Would it have been a better argument if we could communicate this way? Me, popping, rolling and chin jutting to make a point about the importance of clarification and reflection while he twirls, kicks and summersaults across he living room in rebuttal: You don’t have to reflect to listen.  Would we end up in flailing versions of West Side Story, a Jets vs. Rockets: Communication Miscommunication Breakdown! Would we listen differently? Discover new perspectives?  Would we see one another anew?

The mime is gone.

How does he do that? Just appear and disappear?  The other dancers have left as well.  The lone man remains standing in a white pool of light, one arm arched over his head, fingers dangling towards the floor. The other arm folded around his waist.  After a few moments, I realize his arms are reversed and that if I’m patient enough, I can see the slight rise and fall of his abdomen.

I reach over for my husband’s hand.  I will not be pirouetting through the living room to tell him that he does in fact, need to learn how to validate my feelings more.  But I can try.
Posted by Cristien Storm at 8:53 AM No comments: